IF YOU’VE been to Ipswich Jets or joined the Lost Ipswich Facebook group, chances are you’ll know Greg “Jacko” Lyons. What you might not know though, is that he’s a proud ex-RAAF member and a bit of a history buff, so when he went to Europe to visit several historical sites, it was a perfect chance for Jacko to share his advice with anyone in Ipswich keen to do the same. Here are his words about his trip. Who went on your holiday? My Partner Karen and I decided to visit our friends in the UK and as we were there we would visit as much as we could. How did you plan ahead? About 12 months out, when we first discussed the trip, we both started making a list of everything we wanted to see. I watched a lot of travel videos on Youtube and picked up extra hints on places to visit. Obviously there were some “family” places to visit so Google Maps and other sites were accessed to gain as much info as I could. What inspired you to visit these historical sites through Europe? There were three main reasons. My grandfather was killed in WWI and is buried in France. No one in the family had visited. My uncle was a Wellington pilot and was killed over Europe so a visit to the base he flew out of in England was planned on our road trip through the UK. My great-great-grandfather and his family came from the village of Harbury in Warwickshire so that was another must-do. Which famous war sites did you visit? As a visit to my grandfather’s grave was the main reason to head to France, he was at the start of a very emotional trip through Northern Frances battlefields, which included a visit to his grave at Achiet le Grande, Villers Bretonneux, many small cemeteries along the route, Menin Gate and the beach of Dunkirk. How did you get there? Fortunately our friends in the UK decided to take us on a road trip through France and Belgium. Sadly we didn’t get to spend as much time as I would’ve liked to to just take in all the sites. Trust me, there is a lot of cemeteries and points of interest in northern France alone. The enormity of battlefield sites continues through Belgium but sadly I did not get there. So that is on my bucket list for the next trip. What were your first impressions of the sites? How beautiful and picturesque the countryside is around the cemeteries and how well kept and respected by the local French people they are. The other thing that hit me was there were so many cemeteries in such a small area of countryside. Was it what you expected? I did not have expectations, but one thing it did was let us experience the sense of horror and massive sacrifice that all nations suffered during a futile war as all wars are. Being ex-military, I was proud to say I stood amongst many Australians who paid for our freedom. What was your favourite experience out of all the sites you visited? Obviously being the first family member to visit my grandfather’s final resting place. He left his home town of Wondai to fight in the Great War, and at just 28 years of age his fight was over. Menin Gate Memorial was another highlight, the Menin Gate was erected in 1927 and contains over 54,000 names of Commonwealth soldiers with no known grave. They are listed by unit and we were overawed by the enormity of the numbers of Australians with no known final resting place. Was it an emotional experience for you? My grandfather’s grave visit was very emotional, my thoughts went back to my gran who, bringing up a young family, was on her own. Another important fact here was my mum had two older brothers and both those were killed and had no families. I went through a variety of emotions from relief to finding his grave, sadness in knowing that I was the first family member to see his grave and also the fact that his life was cut short at such a young age. I felt a sense of extreme pride being an Aussie being able to freely travel across the world to say hello to a grandfather whom I never met but admire for what he did. My final task on his visit was to sprinkle Aussie soil on his grave and plant three Australian flags to represent his children. What tips would you give Ipswich residents thinking of going to visit historical sites? Plan well ahead and work out the most important sites to visit, and you need time to take it all in, there is so much to see and experience. What would you do differently if you went back? Take more time. Unfortunately we were with another couple and they had planned a few things so we did miss out on so much. I would plan to stay in a central location and just take our time visiting the sites around our stop, then move on to the next location. Where do you plan to go next and why? Either another trip to Europe to take in the Northern Lights, Germany and a few more locations we never got to or to America as there is so much to see, New York, Washington, Memphis, Los Angeles and so much more. Did you go somewhere new for a holiday in the past year? Care to share your tips and experiences? Email: Darren.hallesy@qt.com.au 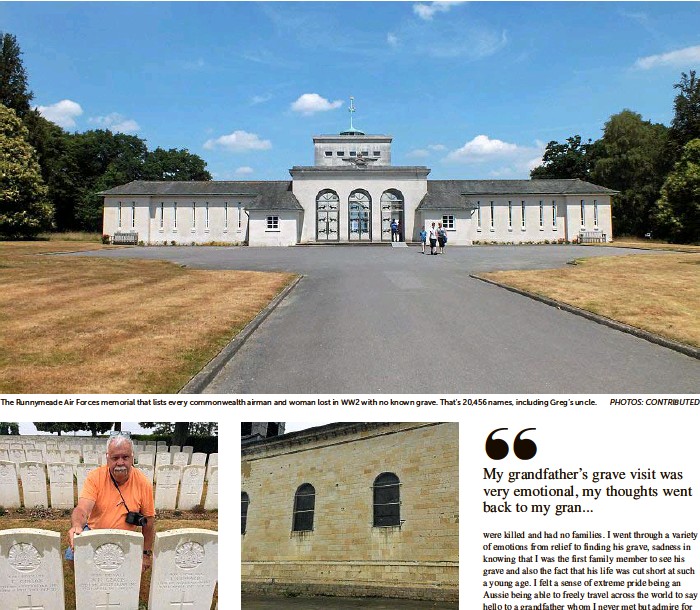