THERE’S been one item that has created a buzz among chocoholics all year, and it’s Ruby chocolate, the first new chocolate in 80 years. Earlier this year Nigella Lawson used it when she appeared on MasterChef, and the nation went nuts. Ruby chocolate is the newest chocolate discovery and sits alongside, milk, dark and white chocolate as only the fourth natural chocolate. It was only unveiled to the world last year, and is currently only available in Japan, Korea, the United Kingdom and now Australia. Derived from the ruby cocoa bean, it is only grown in Ecuador, Brazil and the Ivory Coast and contains 47 per cent cocoa. So, if you’ve yet to try it, what does it taste like? Well QT Magazine forced itself to do all the tasting for you and attended a special launch for the chocolate under the control of founder and CEO of San Churro Giro Maurici, plus one of the nation’s top chocolate creators, Tim Clark, who is the genius behind Cacao in Melbourne. Tim represented Australia at the World Chocolate Masters, competing in Paris, so he knows his stuff. So how do you describe the taste of ruby chocolate? Some say it tastes like a light berry chocolate, others say it reminds them of citrus, but still with a smooth texture. In all honesty, you should be the judge, but rest assured it is nothing like any chocolate you’ve had before and get ready to see ruby chocolate appear on more and more menus. Tim believes that the new chocolate represents a continuing interest in new foods in Australia, and feels that it will be well accepted by the public. “A while ago, there was a boom in handmade chocolates as consumers have become more discerning, and they are appreciating a quality experience,” he said. “There is such an appreciation for food now, and premium chocolate’s part of that too. “I’ve educated myself over the past few months working with ruby chocolate, and I’ve found there’s very little information about the history or origins, but I can say it’s a flavourful chocolate, not as sweet as white chocolate yet it pairs perfect with flavours like champagne, coconut and passionfruit, but still enjoyable on its own,” Mr Clark said. “We’re learning as we go on how to work with ruby chocolate, it doesn’t react the same way the other three do, so it’s a work in progress.” Years from now the chocolate will be everywhere, and chances are we won’t see another natural chocolate come along, especially as it has been 80 years since the last one, white chocolate. “It’s been very well received,” Tim continued. “I think most people say they are surprised it’s not as sweet as they expected. “As a nation, we want more, we want to push the boundaries. Almost a century ago white chocolate came out and nobody knew if it was going to take off. Ruby chocolate is a premium product, but I’m sure it will be quickly accepted.” The founder of Chocolateria San Churro, Giro Maurici who has partnered with Tim for their range of handmade chocolates, knows that Aussies are happy to spend money on quality products. “Food is like the new fashion,” Mr Maurici said. “Trends in one city are on Instagram straight away, and we are leading the way in Australia with food. “It came about because as luck would turn out our supplier in Spain was bought out by a company in Belgium that had ruby chocolate. I knew our customers would love it, and people eat with their eyes first.” Like most people, Giro was surprised by the taste. “I was shocked when I first tried it, I liked the berry notes, the tang, and the fact that it is that colour naturally, unlike white chocolate…it’s mind blowing. “It’s the biggest thing we’ve seen in our 12 years as a company, and it’s great to see everyone who sees it be excited when they taste it for the first time.” 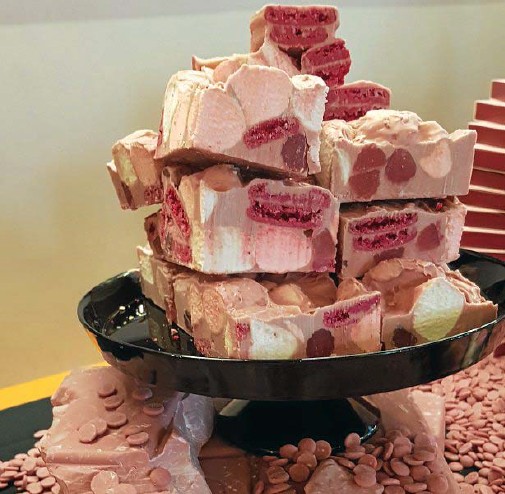 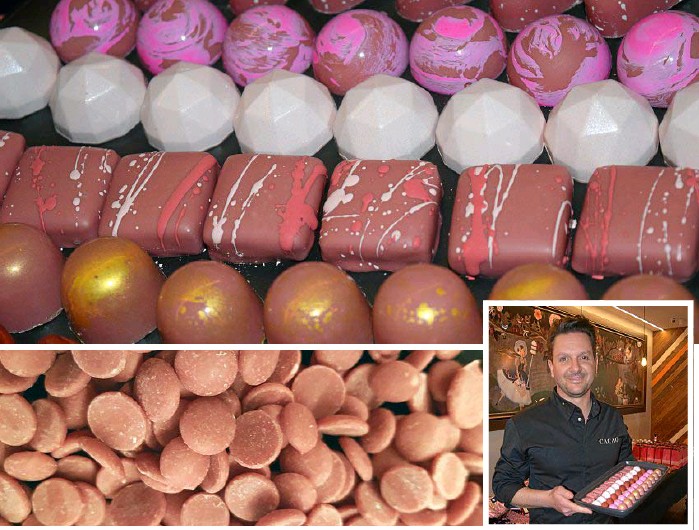